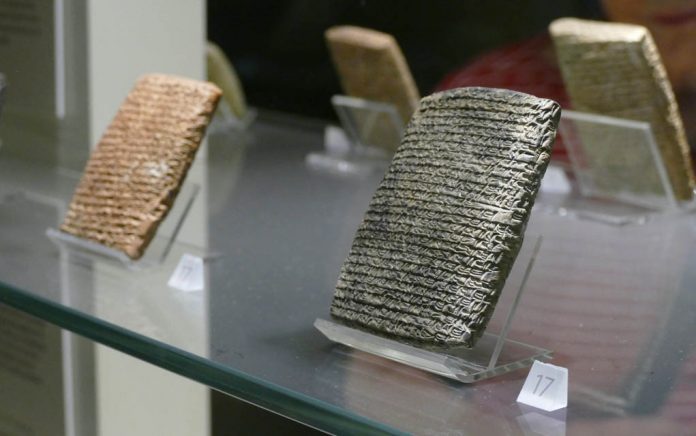 (IntegrityMag.com) – The US has had extensive military engagement in Iraq over the last few decades. First came the Gulf War in 1991, then the eight-year war in 2003. The Iraqi people suffered heavily during those campaigns, not least through the loss of important historical artifacts pillaged from them and scattered around the globe. In good news for the country, however, one such item is now on its way back home.

The Gilgamesh Dream Tablet & Its Journey

Archaeologists unearthed the Gilgamesh Dream Tablet as part of a collection of a dozen clay cuneiform tablets in 1853 in the rubble of Assyrian King Ashurbanipal’s library. While the Gulf War was underway in Iraq in 1991, looters took the tablet (valued at $1.7 million today) from an Iraqi museum. We’re not exactly sure what happened over the following years, but we do know smugglers brought it into the US illegally in 2003.

Hobby Lobby, a group of devout Christian collectors based in Oklahoma City, acquired the artifact for the Museum of the Bible in Washington, DC. An industry expert warned the group that the tablet likely made its way to the US illegally, but Hobby Lobby maintained it did business with the Middle-Eastern contacts in good faith.

Homeland Security Investigations agents seized the tablet in 2019 as part of a general effort to return stolen artifacts of this nature to their countries of origin. A highly active black market exists for ancient artifacts, and criminals can profit hugely by smuggling and trading them.

Acting Head of Homeland Security Investigations, Steve Francis, is a child of Iraqi parents belonging to a Christian sect called Chaldean Iraqis, who are Christian. Francis remarked that the project was very special to him, given his heritage.

A repatriation ceremony for the Gilgamesh Dream Tablet took place at the Smithsonian’s National Museum of the American Indian on Thursday, September 23, with Iraqi government officials in attendance.

The Epic of Gilgamesh

The tablet features a snippet of a Sumerian poem that forms part of the Epic of Gilgamesh, the oldest recognized epic poem in the world. The poem tells the tale of Gilgamesh, a mythical demigod who, experts believe, is based on a real king from Mesopotamia who was in power sometime between 2,800 and 2,500 BCE. The fictional ruler’s many feats include a trip to the bottom of the ocean to pick up a plant bestowing everlasting life; unfortunately for him, he lost the invaluable item to a serpent.