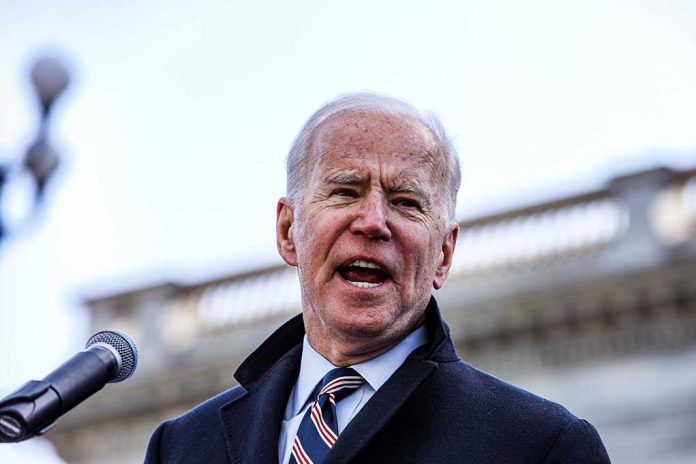 (IntegrityMag.com) – President Joe Biden and his supporting officials have attracted fierce criticism over their perceived mistakes during the withdrawal from war-torn Afghanistan. Some feel the deadline of August 31 was arbitrary, leading to unnecessary haste. Others think the decision to abandon certain tactical strongholds, such as the Bagram Airfield, was a strategic disaster. However, many people are simply upset at Joe Biden’s demeanor, alleging the president doesn’t appreciate the gravity of the situation and the emotions of those affected.

Getting Short With a Grieving Parent

On Sunday, August 29, Biden met with the families of 13 military members killed in the suicide bomb attack on Hamid Karzai Airport in Kabul. During their private time together, Mark Schmitz, father of Lance Cpl. Jared Schmitz, expressed his dissatisfaction with the president. According to Schmitz, he glared at Biden, leading the president to focus more of his attention on Schmitz’s ex-wife.

However, Schmitz was determined to let President Biden know how he felt. He produced a picture of his son, telling Biden never to “forget that face.” He also demanded the president take some time to “learn [the] stories” of the military men and women who had died.

Schmitz claims Biden bristled upon hearing this advice, and the grieving father says the president snapped back, “I do know their stories.”

Though Schmitz disagreed with Biden’s handling of the military disengagement from Afghanistan, he was keen to stress he did not criticize the president for political reasons. He thought the withdrawal from Afghanistan was the right move, but he believes the Commander in Chief and military leaders mishandled the operation. He actually commended Joe Biden for keeping and updating a card recording the deaths of service members in Iraq and Afghanistan.

Looking at His Watch

This incident wasn’t the first report of President Biden behaving inappropriately in the wake of the Kabul attack. During the dignified transfer ceremony during which families receive the remains of their departed relatives, many viewers noted Biden was checking his watch, with a USA Today fact-check confirming he looked at the timepiece at least three times.

Some have sought to contrast this apparent display of carelessness with former President Donald Trump, recognized as highly respectful of the military and military veterans.

There are several ways to look at President Joe Biden’s apparent lack of empathy. Some will say he has displayed unacceptable carelessness that a different leader would never dream of exhibiting. Others will defend him, pointing out that he has an enormously difficult job and that slips in his demeanor are therefore excusable to some extent. Ultimately, he answers to the people of the United States for his decisions and his demeanor.