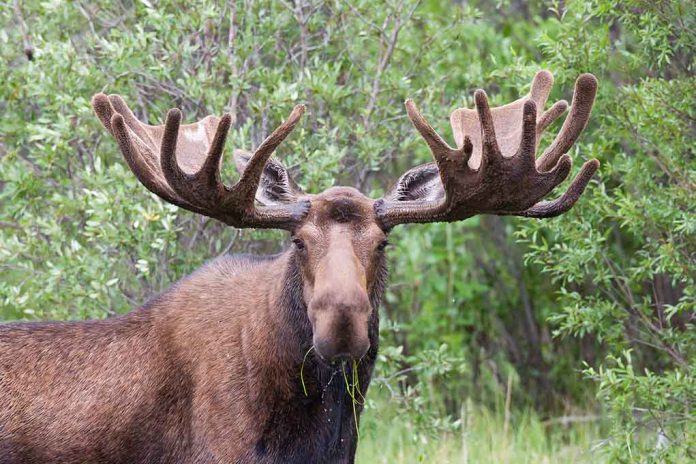 (IntegrityMag.com) – The largest of all deer species, moose grow to around 1,800 pounds in weight and over 6 feet in height. The males of the species grow antlers that can stretch to around six feet in fully developed adults. The last place you’d want to see a creature of such dimensions indoors, but staff and students at one school in Saskatchewan, Canada, recently had a terrifying encounter in their classroom.

Early one Thursday morning, just as staff at Saskatoon’s Sylvia Fedoruk School were finishing up with the day’s before-school program, a moose crashed into one of the building’s classrooms through a window. The students in the room managed to make it out safely while the apparently dazed moose settled on the floor.

Authorities arrived on the scene to sedate the wild animal and bring it to a safe location outside the city. The moose was reportedly a female, approximately two years old. Photos and video of the animal’s escapades have made their way across Canada, and she’s now something of a minor celebrity in the country.

One child suffered minor injuries during the animal’s intrusion, but the student didn’t require medical attention. The rest of the school day reportedly proceeded as normal, presumably to the chagrin of many students who might have been looking forward to an unscheduled vacation day.